Democrats work on US Troop Pullout by August, 2008

Initiating the undying issue of the US troops that are in Iraq and to hopefully instigate the demand to put an end to the 4 years dilemma is in the works as spearheaded by various sectors of the senate and the house democrats. Only President Bush stands in the way of such legislation where the main concern is recalling the US troops and restructuring where they should be focused. 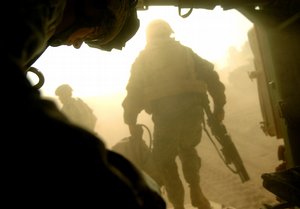 The main agenda for the legislation is to refocus the original plan of the military that of which is to fight the rising count of terrorism in various parts of the world. Much of the focus will start to place the original focus on Afghanistan where terrorism started in the first place.

Such a re-evaluation is seen as setting the proper targets and review of the troops placement since terrorism has not been fully covered as of to date. With the impending plan, the US troops are expected to be set back on the right track on the continuing war against terrorism.